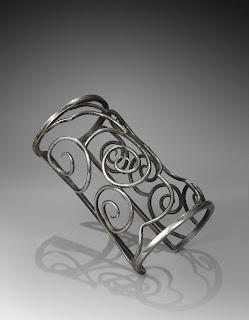 We have recently acquired this amazing bracelet and we couldn’t wait to share it with you. In fact we will be bringing it with us to the International Fine Art & Antique Dealers Show next week (Oct 22-Oct 28). This cuff-bracelet is unique not just because of its design, but because of who designed it. Conceived by the renowned French couturier Paul Poiret, this is a rare piece of jewelry. While Poiret wasn’t averse to lending his talents to clothing, interior, and stage design, jewelry was not so much a part of his repertoire.

What struck me immediately about this bracelet is how modern the design is. It resembles the jewelry created by Art Smith, in his Greenwich Village shop, in the 1950s. Even the signature on the Poiret piece resembles Smith’s style. Date circa 1920, Poiret’s material of choice for this cuff is silver and the decorative swirls resemble the designs of his textiles. Although I must note that Raoul Dufy, who worked with Poiret at his decorating firm, “Atelier Martine”, was also involved in the designs of these. 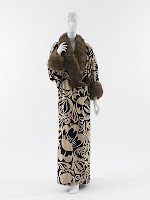 Like Poiret’s clothing this bracelet is quite theatrical. It is possible that this bracelet was created for the very memorable costume party of the 24 june 1911 in his private house, Faubourg Saint Honoré, ‘mille et deuxième nuit’, (Thousand and Second Night) with a chosen decor, very influenced by the Persian. This ball was one of the most incredible and amazing spectacles. The Parisian beau-monde was asked to attend in their best Oriental costumes, many of them, of course, choosing to wear Poiret’s dazzling ensembles (Poiret would probably appreciate this season’s crazy for the “harem” pant, which wa part of his spring collection in 1911 and proved to be very controversial at that time). It really is impossible to capture, in words, the beauty and the magic of that memorable evening.

At some point, Poiret also had jewelry created for him by the Maison Gripoix, founded in the 1870s, which specialized in fanciful costume jewelry creations. They were responsible for producing the jewelry designs of many French couturiers, including House of Worth, Christian Dior, Yves Saint Laurent, and most famously Coco Chanel.

Poiret’s familial connection to jewelry design was quite close. His sister, Jeanne was married to René Boivin, who was a renowned French jewelry designer. Boivin’s jewelry house has a very interesting story as well. The house was founded in 1890 but it wasn’t until the 1930s and 1940s that it became known for producing the most original jewelry creations in all of Paris. Boivin passed away shortly after World War I but the house continued to operate under his wife’s leadership. Jeanne, including her daughter Germaine, hired a group of very talented women designers, including Suzanne Belperron, who were responsible for jewelry that was bold, fresh and very elegant. Even today jewelry from Boivin is very sought-after by collectors.