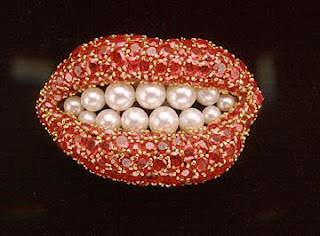 We consider ourselves very fortunate to own one of Dali’s most iconic pieces of jewelry – the Ruby Lips With Teeth Like Pearls. Dali took this cliché, and created a fabulous and sexy brooch. The full, curving lips are paved with beautiful rubies. The teeth, naturally, are very fine pearls. This brooch gets lots of attention. I wore it a while back to a museum dinner, and a male acquaintance of mine actually stooped down and kissed them!

Dali is arguably the most famous of the Surrealist artists. Just the name Dali evokes images of the bizarre. This is due, in part, to his flamboyant personality and mania for self-promotion, but is also the result of the precision of his technique, his fascinating images of simulated but convincing paranoia, and of course, his extravagant personality -– he was almost a living embodiment of the figures in his surreal world.

Dali had always been interested in translating his ideas into precious jewelry. It was during the 1940’s and 1950’s that he actually created a body of jewelry based on his singular, surrealist images. Some of the designs for these jewels were taken directly from his paintings. He wanted to transform the two dimensional into the third dimension, and loved adapting his images to precious, small sculptures that could be worn.

Quite a lot of his jewelry, though, is too big to actually wear. When we had the opportunity to visit the Dali Museum in Figueras, Spain, we were surprised by the scale of many of the pieces, which we had previously only seen in books. The genius of these pieces is staggering – it was truly an awe-inspiring experience to see these pieces before us.

Dali’s first jewels were commissioned by a wealthy Scandinavian businessman named Eric Ertmann, and these jewels and objets d’art caused a sensation when they were shown at the1954 Milan Triennial. The collection was full of richness and exuberance, and was widely admired and quite influential. In 1958, the Owen Cheatham foundation acquired the collection, which was subsequently exhibited around the world, giving a wealth of new images to jewelry design.

Of course, the success of the collection led to private commissions and to the production of some of the jewels in simpler and less labor-intensive versions — using enamel instead of rubies and emeralds, for example. Dali developed images especially for a more “mass” market, such as the crossed dove’s wings, meant to symbolize peace. These were done as earrings and rings, with and without stones.

In 1961, Dali participated in the historically important “International Exhibition of Modern Jewelry” at Goldsmiths Hall in London.

Dali’s entrance into the area of jewelry design was important for several reasons:

Firstly, he was an artist of international stature, a genius in his own twisted and very original way. When any artist does jewelry, it is always interesting to take a look. His jewelry designs successfully bridged the gap between art and ornament — no mean achievement, and something that few great artists who tried their hand at jewelry were able to do as successfully.

His ideas gave a burst of fresh energy to post-war design. Here were new images and ideas to play with. He not only gave courage to other artists to try jewelry, but also had a great influence on the American studio movement.

Today, his pieces are highly sought-after, but caution to the collector – there are pieces on the market that are copies, especially of the Ruby Lips and the Eye of Time. Dali also did editions of jewelry that were quite ugly – long ropy things of twisted figures and blobs. They were done in unknown quantity, and have little artistic merit. 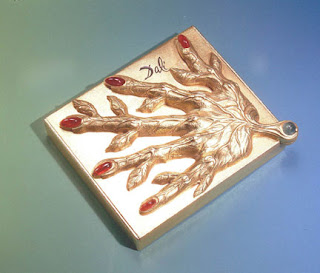 Dali produced his jewels with the help of several people. Mr. Ertman, as I mentioned, provided the money. Mr. Carlos B. Alemany was a jeweler who organized the fabrication and eventual selling of the designs. He had a shop in the St. Regis Hotel in New York City. The actual bench – work was done by Charles Valliant, of the 47th Street workshop of Valliant and Devere.

We have loaned Ruby Lips to many museum exhibitions. After being in a museum show in Belgium of Artist’s jewelry, the Lips went off to the “Surreal Things: Surrealism and Design” exhibition that opened in London at the Victoria and Albert Museum, and traveled for several years to venues in Europe and North America. We were told that the Ruby Lips were among the most popular pieces in the exhibition. They were on view soon at the High Museum in Atlanta, Georgia, from August 7, 2010 until January 9, 2011, in an exhibition called Dali: The Late Works.

We are also fortunate to have a fabulous gold box with the Leaf-Veined Hand, ornamented with cabochon ruby nails. Like the Ruby Lips, this piece has also been in many exhibitions, as can also been seen at the High Museum.

This article and the images in it are copyright- protected, and may not be excerpted or reproduced in any form without the consent of Audrey Friedman at Primavera Gallery NY.